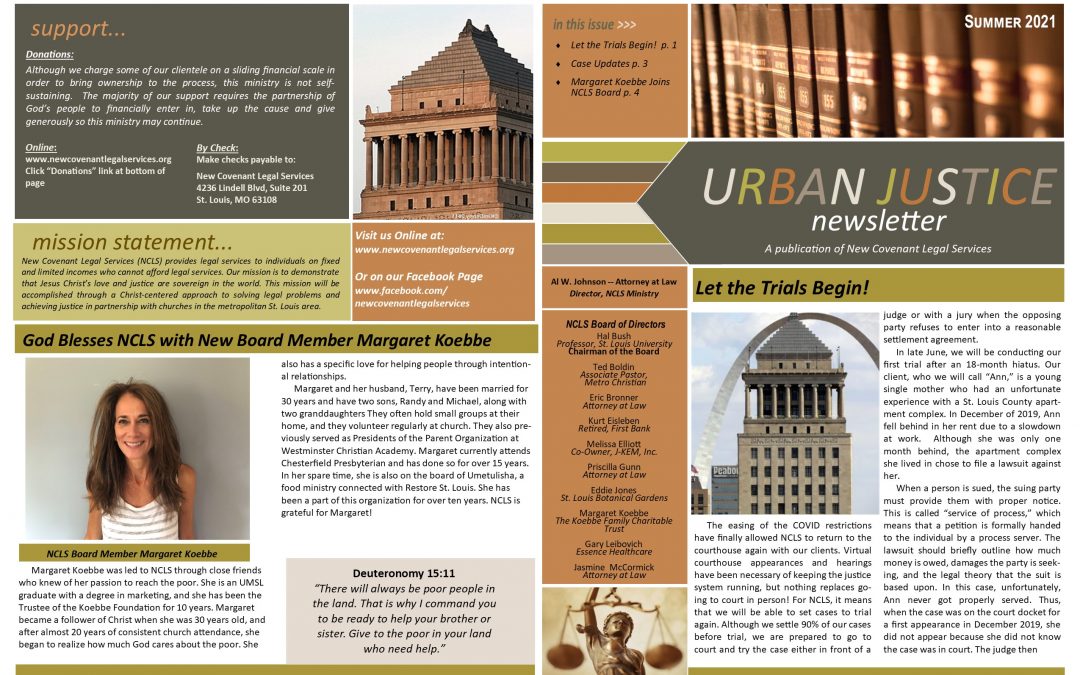 Download a PDF of this newsletter here or continue to read below.

The easing of the COVID restrictions have finally allowed NCLS to return to the courthouse again with our clients. Virtual courthouse appearances and hearings have been necessary of keeping the justice system running, but nothing replaces go-ing to court in person! For NCLS, it means that we will be able to set cases to trial again. Although we settle 90% of our cases before trial, we are prepared to go to court and try the case either in front of a judge or with a jury when the opposing party refuses to enter into a reasonable settlement agreement.

In late June, we will be conducting our first trial after an 18-month hiatus. Our client, who we will call “Ann,” is a young single mother who had an unfortunate experience with a St. Louis County apartment complex. In December of 2019, Ann fell behind in her rent due to a slowdown at work. Although she was only one month behind, the apartment complex she lived in chose to file a lawsuit against her.

When a person is sued, the suing party must provide them with proper notice. This is called “service of process,” which means that a petition is formally handed to the individual by a process server. The lawsuit should briefly outline how much money is owed, damages the party is seek-ing, and the legal theory that the suit is based upon. In this case, unfortunately, Ann never got properly served. Thus, when the case was on the court docket for a first appearance in December 2019, she did not appear because she did not know the case was in court. The judge then entered a default judgment against her for several thou-sand dollars.

Ann found out about the default judgment approximately 10 days later when she was advised that, as a result of the judgment, she was going to face eviction proceedings within the next several weeks. Ann paid all the monies that were due in court and notified the property manager for the apartment complex during the first week of January of her payment. She paid a prorated amount that was quoted to her by the property manager.

Amazingly, the apartment complex still went through with the eviction, and failed to advise the court that she had paid all the monies that were due in court! This meant that Ann had both an eviction and an unsatisfied judgment on her record, rendering it impossible for her to obtain another apartment. This cost her a job offer that she had in Atlanta, Georgia because she was unable to move and secure an apartment in Atlanta.

Ann approached NCLS in January of 2020. We immediately filed a motion to have the default judgment set aside. This was successful and we had the case set to go to trial in late March 2020, when the pandemic shut down the courts. Ann has been waiting patiently for her day in court for the past 15 months. She eventually was able to move to Atlanta, but she plans to travel back to St. Louis for the trial. We will be seeking damages for her lost wages and other monetary losses, as well as having our attorney’s fees paid by the complex.

A second case we plan to try within the next 60 days is another single mother “Brittany” who has rented an apartment in St. Louis City that proved to be infested with mold and other defects that rendered the premises virtually un-inhabitable. She paid the rent for approximately six months based on the landlord’s promises to fix the problems in the apartment. After the landlord refused to fix the defects, Brittany approached him to attempt to move from the apartment. The landlord advised her that if she moved and dishonored her lease, she would be sued. Brittany then refused to pay the rent until the apartment’s issues were remedied. Instead of fixing the multiple problems with the apartment, the landlord sued her for alleged back rent in St. Louis City Circuit Court. NCLS has filed counter-claims on Brittany’s behalf against the landlord and plans to ask for substantial damages on behalf of our client. NCLS Board Member and volunteer attorney, Priscilla Gunn, has been representing Brittany in this case.

Please pray for both these women and for our NCLS attorneys that we will present our case in a fair but convincing manner. Like Moses, we need God’s help to guide our steps and formulate our words for these clients in an effective, but humble manner.

Former Tenant Sued for 6-year-old Alleged Past Due Rent

In a recent case that we have taken on, a young woman was sued for alleged past due rent from an apartment that she has not lived in for five years. Two previous lawsuits have been filed against her and have been dis-missed. Inexplicably, in January of 2021, the landlord obtained another law firm who filed suit again against this woman again. She has documentation that she moved out the apartment in 2016 with her rent paid in full. To add insult to injury, the apartment complex reported her to a credit bureau as owing past due rent in excess of $1500. This means that her prospects of obtaining a new apartment in the future are very limited. NCLS has filed counter-claims for damages under theories of abuse of process and defamation/injurious falsehood.

In one of our older cases, a couple moved out of an apartment complex after plumbing failure in their apartment caused several thousand dollars’ worth of water dam-age to some newly purchased furniture. The landlord originally told them that they had been good tenants, and they would get their full security deposit back. After the tenants move out the landlord refused to return their security de-posit and gave them a list of supposed “damages” they caused to the apartment and demanded that they pay over $1000. After efforts to resolve this case without suit were unsuccessful, we filed a lawsuit in St Louis City on behalf of our clients in August of 2020, and it remains pending. We have sued under the Missouri Merchandising Practices Act for recovery of their damages plus attorney fees and under §535.300 RSMo. for return of their damage deposit.

“Landlord” Sues for Past Rent for Building He Doesn’t Own

In March 2021, we took on a case for a woman who was sued for alleged nonpayment of rent. The woman lived in the house and paid her rent for several years but learned approximately a year ago that the man claiming to be her “landlord” did not actually own the building. Additionally, he failed to pay income taxes or make any repairs to the building. We have filed counterclaims against the landlord for repayment of rent that has been fraudulently paid. Our client is making plans to move out of the building in the near future.

Last week we were retained by a young woman living in an apartment complex in North City. She has lived there for over a year and has been a good tenant. However, when she announced plans to move out at the end of the lease, the property manager of the apartment complex insisted that she use a moving company that the property manager owns! When the client refused to use the moving company, the property manager retaliated against her by removing her air conditioning unit during the hottest week of the year to date. We have forwarded a letter to the management company demanding the air conditioning unit be restored, and the client be allowed to stay in the apartment until the end of July when she has made plans to move out.

Margaret Koebbe was led to NCLS through close friends who knew of her passion to reach the poor. She is an UMSL graduate with a degree in marketing, and she has been the Trustee of the Koebbe Foundation for 10 years. Margaret became a follower of Christ when she was 30 years old, and after almost 20 years of consistent church attendance, she began to realize how much God cares about the poor. She also has a specific love for helping people through intentional relationships.

Margaret and her husband, Terry, have been married for 30 years and have two sons, Randy and Michael, along with two granddaughters They often hold small groups at their home, and they volunteer regularly at church. They also previously served as Presidents of the Parent Organization at Westminster Christian Academy. Margaret currently attends Chesterfield Presbyterian and has done so for over 15 years. In her spare time, she is also on the board of Umetulisha, a food ministry connected with Restore St. Louis. She has been a part of this organization for over ten years. NCLS is grateful for Margaret!

NCLS needs volunteers with office administrative skills to help us answer the phones at the office periodically. If you are able to volunteer 5-10 hours a month between the hours of 9am-5pm, please email us at info@nclsstl.org or call the office at 314-726-6489.